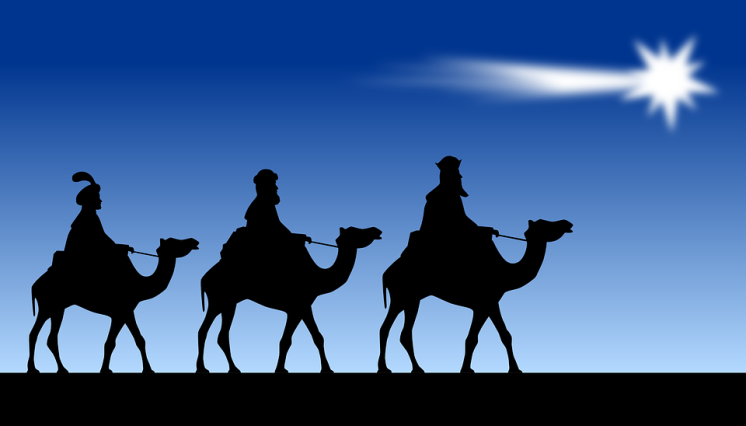 By the Reverend Dr. John Bell

Much of what we know or think we know about Christmas is the result of singing erroneous ditties in hymns and carols. Fake texts, we might call them.

The First Nowell tells us that the shepherds saw a star over the manger. The Gospel of Luke does not mention a star in association with the shepherds.

As With Gladness tells us that there were three wise men – though the Bible does not say so – , and also that they were siamese triplets:

‘Then entered in those wise men three

full reverently upon the knee’   …. one knee between three..

…that’s a bigger miracle than the virgin birth.!

And countless nativity plays will have convinced us that the innkeeper was married, and that all the Edinburgh zoo was present in the stable, and that the wise men arrived just as the shepherds were leaving.

Well, the Bible does not tell us so.

The Bible suggests that the arrival of these visitors from the area we know call Iran/Iraq  happened not on the night of Jesus’ birth but some time later, with the clear possibility that he was an infant.  Hence the slaughter of the innocents, to which we will come later is a culling not of babies but of boys aged two and under.

It is not my intention to speak – as T.S. Elliot does with great eloquence – about the pilgrimage of the Magi. I want to look towards the end of their story, to the verses which link their visit to the Holy Family and their return journey.

They bowed down and worshipped him.

Then they opened their treasures and presented him

with gifts of gold, frankincense and myrrh.

And having been warned in a dream not to go back to Herod,

they returned home by another way.

These words introduce us to the first conversion which Jesus enabled.

It wasn’t the call to Andrew and Peter

It was the Magi, the Wise Men, these legendary figures from the Middle East who, having encountered the child Jesus, could not return by the way on which they had arrived.

We might note that the narrative makes it clear to us that it was not their intellect which brought them to Jesus – their intellect took them to Herod’s palace – to the logical place in which a king might be born.

Nor was it the advice or request of Mary or Joseph which made them change their itinerary for the way home. It was the experience of bowing down and worshipping

the child which was the catalyst for the common dream they had, through which they discerned they had to revise their plans.

It is an experience of unadulterated wonder, something which, in time would be experienced by Andrew and Peter who, illogically, left their nets to follow one they did not know. And that same experience of wonder was known by the demoniac and many other people whom Jesus healed when were touched by his transformative presence.

What exactly is wonder?

I hesitate to make any definition. To do that is, in away, to ruin the essential mystery of the subject. But I can point to a very significant recent experience.

At the moment and for another 10 days, I am sharing my house with the family who have bought it. They knew that I couldn’t move out until January, and were happy to cohabit with me.

They have two children, aged six and four, both of whom were born in the Netherlands, and the parents have been keen to let them celebrate their Dutch as well as their Scottish culture.

So Sinter Klaas Daag – or St Nicholas Day – on 6th December is important for them, especially the evening of the 5th. The parents asked me if I would do the needful, namely wait until the children were eating or playing, then put two snall red sacks outside the door of the house. Then I had to knock the door loudly and disappear.

So I did this.

I put the sacks on the doormat. I closed the door from the inside, and then quickly retreated into my study. When  I heared small feet running up the hall. I opened the door and asked what all the noise was about. And the two infants said

When the door was opened, they saw the two red sacks, each one bearing a different name. They could hardly speak. Their eyes said it all.

Jamie, the elder took out the small parcels one by one and very slowly opened them with expressions of delight.

Leila watched him, and then she turned her bag upside down and out tumbled the small parcels, at which she stared and stared.

‘Aren’t you going to open one?’

She did not hold the gift.

The gift held her.

Sheer wonder….. not knowledge, not intelligence, not sentiment, but sheer wonder that someone she did not know could be so abundantly generous.

This is the kind of transforming experience which the wise men had, for whom their intelligence and even their own generosity paled into insignificance in the face of the generosity of a God they did not know

who to took the risk

…who took the risk

out of nothing else but selfless love.

Even now, though the Christmas season is over, it is not too late, to wonder at God’s generosity….and to allow that experience to convert, to transform, to change us.

THE CONSEQUENCES OF THE EPIPHANY

If the story of the wise men ended there, we could all sleep comfortably.

But, sadly, their decision to go home by another way had negative consequences, for Herod realising that they had duped him, by not returning to give information about the birthplace of the child. He regarded this new life as potentially rival monarch and so decided to ensure the  eradication of the child who might threaten his power and supplant him.

Thus we heard the story of the bloody slaughter of children – particularly boys under the age of two. We don’t dwell on this story very much. Perhaps it is because the horrendous nature of this episode in Jesus’ life jars with the ‘happy family’ image of the nativity story set in the little town of Bethlehem where all        is peaced and quiet.

Or is it that if we but let it, the slaughter of children to satsify a dominant power has an all too contemporary ring about it?

Three years ago I was at a conference where I heard arguably two of the most eloquent and compelling speakers, both of them women and both – in different ways – witnessing to the sacrifice of children.

The first, when she spoke, said,

‘I think you will all have seen me before,

but not dressed as I am now.

You may have seen me totally naked.’

And you will have seen this person totally naked too. Her name is Kim Phuk (phook) and she appears in one of the most iconic photographs of the 20th century.

She was the naked Vietnamese girl, her arms outstretched like a crucifix, fleeing from her home village of Trang Bang near Saigon, when the might of the US air force mistakenly dropped a cluster  of napalm bomb on women and children.

Against all the odds, Kim whose clothes were doused in Napalm, survived.

Today she is  a Canadian citizen, her clothes cover her whole body which still bears the scars of the massacre of the innocents in Vietnam, the ghoulish harvest of a war which no one ever won.

The other speaker was Samantha Knutt. She never suffered as a child, but as a paediatrician, she developed an interest in children who were being sacrificed in the war zones of the world.  She started a charity which operates all over Africa, particularly in places like the Democratic Republic of the Congo where boy soldiers are recruited and turned into brutes who rape, injure and kill young girls.

In the child armies which are ruled by gangsters engaged in illegal trading of minerals, the boys become as emotionally and psychologically scarred for life as Kim Phuk is scarred in her body. They are innocents being sacrificed on the altar of greed.

We might remember the severely ill children in Syria whose government stalled in allowing them to get medical aid.  But there are also the untold numbers of children in that country sacrificed as innocents as whole populations of towns and cities were mowed down or forcefully turned into refugees, the victims of a proxy war.

But these examples are either historically or geographically distant from us.

So, we do well to consider how in our own time, the worship of twin contemporary deities takes their toll on the very young. On the one hand there is the worship of Mammon which leads to the offspring of the very affluent to enjoy such a surfeit  of privilege that they move being a breed of pampered children to become an elite of narcissistic adults.

On the other hand, there is the penury of families on low incomes or state benefit whose children may be malnourished or homeless or limited in fulfilling their education attainment. For them it is not Mammon  but  Austerity which has become the god on whose altar the health and well-being of the poor are sacrificed.

WHAT YOU DO TO THE LEAST…

I cannot say for certain, but I sometimes wonder what the genesis was of Jesus words that ‘whatever you do to the least of these …you do to me.’

I wonder whether he- who escaped the initiated by Herod, in which many innocent children died – had a conscience about that. He and his parents were lucky enough to escape; but those who weren’t forewarned died.

I wonder whether the knowledge of the fate he escaped compelled him to say these words intended to prevent the sacrifice of future children’s lives in war or through affluence, poverty or abuse.

I can’t say for certain.  We will not know this side of time.

But I do know, that from my experience of watching children fill with wonder, that the more we are moved by and cherish that innocent joy which children exhibit in plenty, the less we may want to subscribe to any practice or any society which requires children to be sacrificed on the altars of   personal power, social prestige or national pride.

TO THE ONE WHO MAKES THIS AND ALL THINGS POSSIBLE BE OUR PRAISE AND GLORY, NOW AND FOREVER.  AMEN.