From the International Welcome Club

From deepest winter at Lake Baikal the world’s largest fresh water lake between Russia and Mongolia to sunny Bali with the best views of the sunset and the cheapest ground floor bar was the span of WOW! places described in one of the ZOOM 8 Conversation Corner sessions last week.

A birthday celebration cruise on a hired yacht to St Kilda was a dream come true for one ‘senior’.

Wildlife such as puffins seen on Mull; the noise of Niagara Water Falls in Canada; and an island about an hour and a half away from Istanbul with only horses and carts for transport, were also clearly described by other Club members.  Istanbul’s beautifully preserved, ancient underground water reservoir was also seen as a photograph of it was shown on screen. The benefits of ZOOM when you know how to use the ‘screen share’ button!

Egypt did it for another person because he’d never seen ancient ruins before. Romania was cited for its beauty. Madrid ranked high for it art galleries and Scotland’s island of Islay was recommended for its peace and beauty.  Tunisia – only a boat trip from the south of France – was another person’s WOW! place because it is so close to Europe yet so totally different.

One ZOOM 8 session was depleted in numbers because the system now requires a password as well as a link and the organisers didn’t realise that till too late. So a lot of people couldn’t get into it. Despite that hiccup – and a re-schedule for later that day – those who gathered in it favoured Tibet, Falkland Islands, Alaska, New Zealand and the mountains of Azerbaijan. But the ultimate WOW! places described on Wednesday 13 May 2020 in the International Club’s Conversation Corner just have to be: Glasgow for its wildlife and a supermarket without a queue outside! 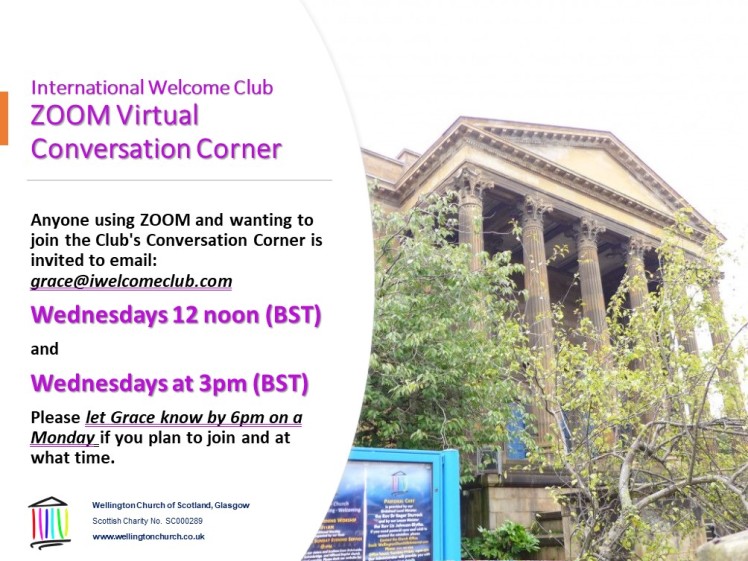