Mix together warm sunshine, an attractive location and good fellowship and you have a recipe for a successful church weekend!  Forty of us gathered in the Atholl Centre in Pitlochry with the theme of the weekend being “Breaking the barriers.”

After settling in, the Friday evening was essentially a ‘film night’ when we watched the Disney film “Zootropolis”   After morning prayers on Saturday, Petra and Niall Hardie gave us questions relating to the film that stimulated us to identify the themes of discrimination, stereotyping and prejudice.

Then Lizy Newswanger encouraged us to think about the barriers to feeling at home in Wellington church and we split into small groups to identify these.

Saturday afternoon was spent in walking in the country to an historic pub in the village of Moulin, browsing the shops in Pitlochry and drinking coffee!   After dinner the young folks organised an enjoyable ceilidh as well as a quiz which kept us all on our toes (literally!) and as we say “a great time was had by all.”

Sunday morning involved a video introducing “The God Question” followed by group discussions led by Robin Green and Roger Sturrock.  The questions addressed related to: Galileo and conflict with church authority and doctrine.  As a church, do we “duck” issues where there appears to be a conflict between science and religion?  What risks are there in opening up our personal beliefs to scrutiny?

We ended the weekend with a morning communion service led by David Sinclair that involved acting out being blind as a preparation to thinking about Jesus dealing with a blind man and the challenge to us to not be morally and spiritually ‘blind’ to the problems in society.  Home after lunch with a lot to reflect on and grateful thanks for a great weekend!

Friday 24th March:  We all set off on in cars and had a nice journey through the countryside. We could see snow on the hills and some sheep in the fields but no lambs yet. I travelled with Kate and Ken and it took some time to get out of Glasgow and on the motorway however we arrived in Pitlochry soon after 5pm.

We were shown around and headed to our rooms. The room I was sharing with another three people was a nice small bedroom with ensuite. There were beds and a bunk bed. I chose the bed.  Not long after our arrival we all sat down to have our first meal together. There were others still to arrive and when they did we all gathered in the meeting room to watch a film called Zootropolis which fitted in with the theme for the weekend: breaking down barriers.

On Saturday We all had breakfast together and met for prayers at 9.15, followed by a session discussing the film we had watched and had a coffee break before the next session.  After a lunch we had free time. Some people climbed a hill and visited two distilleries en route, while others chose to walk to the loch and see the new visitors’ centre.  Everyone enjoyed their afternoon in the sun.  On Saturday night we got dressed up and had a ceilidh, with dancing and games and Heather put on a play. Unfortunately because of my injured knee I could not dance. After this we all needed a much deserved rest and retired to bed.

Our last session of the weekend began at 10am on Sunday followed by coffee and tea. We then paired off and did an exercise about trust where one of the pair wore a blindfold and relied on the other member to guide them up to the place where the church service was being held. We had a lovely church service and communion followed by lunch, after which we packed and headed home.  I had a really good weekend away and could hardly believe how quickly the time had gone.

It was all over for another two years when we will hopefully go away again. Pitlochry was a great success. 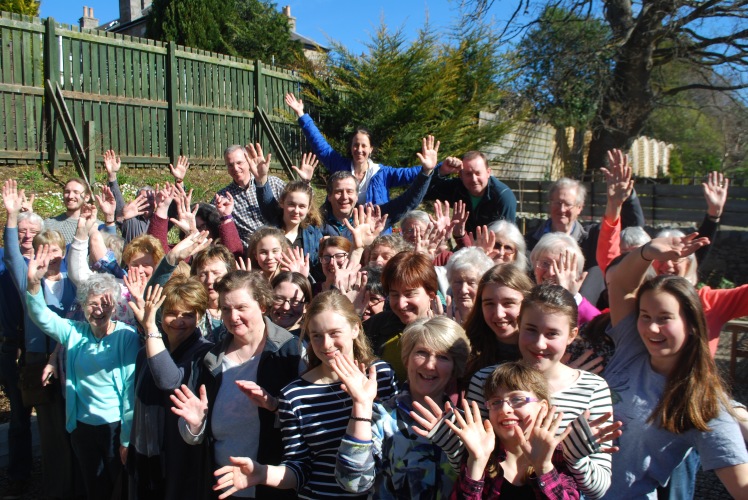