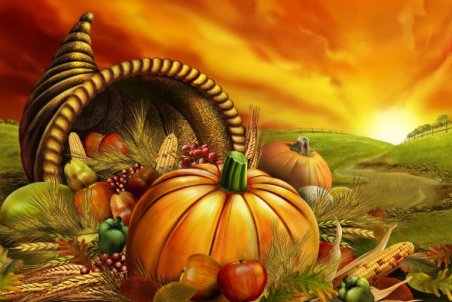 Harvests come in all shapes and sizes. We are gathered with a pile of donations in front of us for the North West Glasgow Foodbank – a kind of harvest of concern, the modern equivalent of leaving the edges of the fields uncropped. If we look outside at the garden, which is now a shared project with Woodlands Community Garden, we see another harvest – a more obvious harvest – stuff growing in the ground, which can be cut, picked, eaten. But harvests come in all shapes and sizes.

Our biblical readings may not have obvious harvest references in them, but we can have a look; we can look for clues about how we approach and understand harvests. Look first at the reading from Lamentations; look there, and you find the talk is of patience – of waiting for the Lord to produce the harvest. It is therefore about trust. Harvests are all about trust. Producing a harvest involves work and skill and dedication – but above all it needs patience and trust. You need to wait, and let the harvest grow – dig, pick, crop too early, and all will be lost. In other words, if you run out of trust and start poking around, there will be no harvest at all.

The letter to Timothy speaks of harvests not in terms of seasons or even years, but in terms of generations. This piece of writing talks of the accumulation of faith from one generation to the next, and then to the one after that. It is about how faith grows in the quietness of living, in the inheritance that is passed down, with the seed that is planted in us, so that we ourselves become the harvest. And then, in the Gospel of Luke, we have Jesus talking about faith as a seed planted in us and growing in us, faith that has the ability to produce an extraordinary harvest, a harvest without limits and without boundaries. And he talks of the idea that our work for that harvest, even our work as that harvest, is (in the words with which we began) ‘only what we ought to have done’. So listen to the report of a promising new harvest:
‘In the jungle, entire encampments have been abandoned, bomb shelters are empty, guns – soon to be decommissioned – hang idle next to metal water-bottles and civilian clothes, and field hospitals have no patients.’

Today in Colombia a referendum is taking place; the people are voting on the end of a civil war that has been going on for fifty-two years. It has been a war of oppression, of atrocity, of indiscriminate violence and death, of suffering and heartache; as with so many others, it has been a war originally over who controlled and benefitted from the harvest, that set out to advance the cause of the poor, but ended up funding itself by the production and distribution of hard drugs. And now, as in other places in the past, as in wars of all kinds, the energy has finally been drained from it. Now the people are being asked to decide if they can, at long last, find their way to a harvest of peace. But it’s not as easy as it sounds. There are alternative harvests on offer.

As with so much of the history of the world, the harvest you expect or work for or see will depend on your understanding of the seed, and the soil, and the sower. So in Colombia your view of the past, and therefore of the present and the future, will be inescapably influenced by your own family history, or that of your friends or colleagues or neighbours. If you have suffered directly from the violence of the past half century, you will have a view – and almost everyone will have suffered in that way, or will know someone who has.

For example, do you view the FARC (the Revolutionary Armed Forces of Colombia – People’s Army) as the instigators and principal perpetrators of the violence – or do you see their formation and tactics as a response to the violence that went before. Or are they instead the whirlwind that Colombia reaped having sown the wind in the decades before? Harvests come in all shapes and sizes.

The period known as ‘La Violencia’ actually began in the 1940s, though the actual year depends on historical interpretation of events. But its content was a war between the conservatives and liberals, mostly fought out in the countryside. The brutality of this period is told in accounts that I would not begin to repeat here, but which contain descriptions of violence that are literally unbelievable.

The conservatives, widely supported and encouraged by the Catholic Church, were the effective winners, such that there were no liberal candidates for the presidency in 1950. La Violencia drove millions from their homes and killed at least 200,000 people. And, not long after that bout of killing and repression had been brought to a close, people prosecuted and punished, came the FARC; and ever since then they have been fighting a running battle with the forces of the state. They have been branded a ‘terrorist’ organisation by the USA, Canada, and the European Union, but not by Brazil or Argentina or others in the region; to them, they were an armed military opposition. Whatever they are called, the war between the government and the FARC has cost huge numbers of lives, with the United Nations estimating that about 12% of those are the responsibility of the FARC, and 88% the responsibility of the government.

It’s quite a story of sowing whirlwinds, of living by the sword; it’s the best part, or perhaps more accurately the worst part, of seventy years of killing, oppression, extortion, madness, mayhem and despair. And now, now, can that suddenly, or at least finally, be transformed from a harvest of hatred to one of hope? There are those who think not. Listen to this account:

Nohora Tovar, who was kidnapped by the Farc in 2000, believes the Farc should pay for that pain with jail time. Under the peace accord, those responsible for war crimes who confess are eligible to avoid prison and serve out their sentences of up to eight years with as yet undefined “effective restrictions of liberty”. “How is it justice if I, who committed no crime, was ‘imprisoned’ in a rebel camp for four months, and these criminals get off without going to jail?” she said in an interview after a long day of campaigning for the “no” vote. “As a victim and as a Colombian, I am not satisfied with this deal,” said Tovar.

Sigifredo López spent nearly seven years as a Farc hostage after a guerrilla unit kidnapped him and 11 fellow regional legislators in Cali in 2002. He was the only survivor of a confused friendly-fire incident between two Farc units in which all his colleagues were killed. Despite his experience, López is actively promoting a “yes” vote in the plebiscite. “I support ‘yes’ because children being born today deserve to live in a better country. It’s an act of responsibility with the new generations to vote yes to give them a country that has overcome its conflict,” he said. “In 20 years people won’t remember that Sigifredo López was kidnapped, that his fellow deputies were murdered; they won’t remember the massacre at Bojayá or El Nogal,” he said in an interview at his law offices in Cali. “But they will be grateful that they live in a country that is no longer at war.”

The question is, in Colombia, in many other places, and even in our own, comparatively petty lives: what is the harvest? What do we reap from our actions? What do we want to reap – for others, for ourselves, for our children? The truth is that today’s plebiscite is, in its way, a harvest; it’s the result of all these years of trouble and terror and tribulation. It is also, however, as with any harvest, a time not only of reaping but also of sowing. It is not only the end, we hope, of the story of violence; it is the beginning of a new possibility.

And that is where two things that we have mentioned already come in, or come back. One is the centrality of trust. The road to a harvest of peace, as with the time of waiting for any harvest, is impossible without trust. Wounds take time to heal; picking constantly at scabs, or digging up seeds to see how they’re doing, only inhibits the work, makes impossible any prospect of success. The full harvest takes time to grow – and patience and trust are essential ingredients.

But the other point to which we return is the place where we started. The work for the kingdom in which people are engaged, in which we hope we are engaged, is not work which comes to an end except in God’s good time. It’s the point which Jesus tried to emphasise to his followers, lest they ever thought the work was done. The work for the kingdom of God is not work that ever allows for the feeling that the work is now complete – and we can relax. Jesus tells them they should say: ‘we have done only what we ought to have done!’

Today, in Colombia, people have a choice and a chance – a choice between reaping a harvest of hate and sowing a prospect of peace. Their chance, and the expectation of most is that they will do so, is to choose peace – by a majority. And, because a significant minority, do not want too easily to let go of the past, that peace will have to be tended, watered, trusted, given time and patience and perseverance and love. It will take the energy and commitment that has for so very, very long been invested in hate. The generations that have passed down hatred from one to the other to the next, need now to find a way to pass on something different, something new.

The harvest of the kingdom opens us up not only to sow seeds but to have seeds sown in us, and to make us seeds in our turn; and in all of this we hope we do what we ought to do, and we hope that others do so as well. Of course, it doesn’t always happen. It is likely, that in another plebiscite today, the people of Hungary will follow the lead of their government and turn their back on the needs of others, seeking to keep whatever harvest they have to themselves – and will do so in the name of the preservation of Christianity.

The harvest of peace being brought to fruit in Colombia has been bought at unimaginable cost – but we hope it will indeed be peace that results. But if evidence were needed that the work of the kingdom’s harvest still requires patience and perseverance, Hungary looks likely to join the list of places providing it. The worry might be that we in the United Kingdom have already, in the way we think of and treat those who come among us, helping with our harvest, sharing our harvest, written ourselves into that same list. So we pray for the people of Colombia, we pray for the people of Hungary, but we in our place still need to do what we can do, to do what we ought to do, to produce and to offer a better, more hopeful, more bountiful, more generous harvest.

The Readings during the Service were: