Thus says the Lord of hosts, the God of Israel:

Take these deeds, both this sealed deed of purchase and this open deed,

and put them in an earthenware jar,

in order that they may last for a long time.

For thus says the Lord of hosts, the God of Israel:

Houses and fields and vineyards shall again be bought in this land. 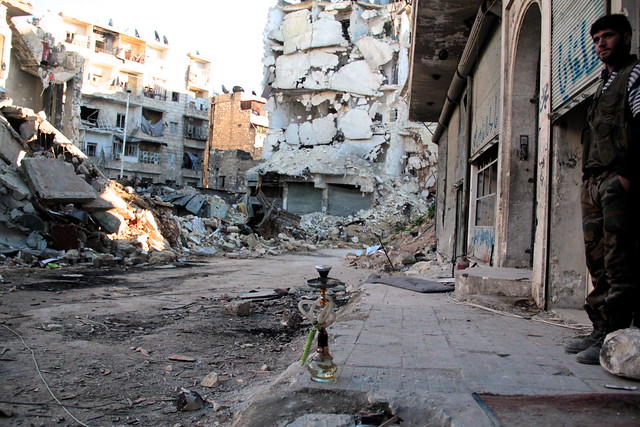 Jeremiah is living in a city under siege.  The enemy is at the gates; the people are suffering; the place is gradually falling to pieces – and so are the nerves and the emotions of the inhabitants.  Jeremiah is also imprisoned because he has predicted the gloom and doom for which his name has become best known; he has said that the city will fall – the siege will succeed in its intention.  So the king is not pleased – Jeremiah is not good for morale; his words are talking the city down.  But Jeremiah is not feeling that things are hopeless at all – rather he is taking his bearings from a different place.  And that idea of taking your bearings, and the question of where those bearings are to be found, will be an idea to which we will return this morning.

But it’s worth thinking a bit more about this idea of living under siege; it’s worth remembering that cities have endured this piece of terrifying, dehumanising inhumanity throughout the history of what we like to call humanity.  Think of Troy according to Homer, think of Stirling before Bannockburn, think of Vienna, think of Paris and its Commune, think of Leningrad, think in recent years of Homs, or of Fallujah, or – as we speak – of Aleppo.  This is an account from Aleppo, published in The Guardian last month:

For the past month I haven’t needed to set a morning alarm – the regime jets do that job for me. Every single day we have been woken at 7am by a missile or by a barrel bomb. I can’t tell if there are mortars, because I am so used to the sound of their explosions that they no longer disturb my sleep. I miss the luxury of waking up slowly, starting the day looking at a picture of my wife and daughter, which I have taped up on the wall.

I miss my Zara, who is only six months old, more than anything else, but for now I have to jump out of bed and race to the latest attack site to help with rescue work. I have become an expert in pulling people out from wreckage, in distinguishing how deeply buried under rubble the screaming victims are, how to spot them in the chaos – they look very much like statues covered in dust. Those tight, shocked hugs that I get from the kids I carry out of the ruins of their homes won’t ever be erased from my memory. Nor can I clean their blood from my T-shirts.

If you were to adapt the descriptions of the armaments involved, my guess is that the account from Aleppo could be transferred to any of the other sieges – including that of Jeremiah’s Jerusalem.  But, in spite of his apparent talk of defeat, Jeremiah insists on hope.  He also insists on describing his act of hope in some detail – and there is a lot of legal detail in there, showing how what he has done has followed all the conveyancing legislation of his time and place.  This includes, for example, two copies of the document: one a working document, one sealed away for reference should the working document ever be lost or damaged.  And the point of it all comes at the end of the passage we read this morning: ‘houses and fields and vineyards shall again be bought in this land’.

Jeremiah buys a plot of land in a city under siege, a city he has told anyone who will listen will soon be lost.  I wonder how many people today are planning on buying property in Aleppo.  About as many, probably, as were buying property in Jerusalem if you don’t count Jeremiah.  So Jeremiah’s insistence on buying land, registering it, making sure people know he has done it, is about more than the land; it’s about investment.  Jeremiah is investing in the city; he’s investing in the future; he’s investing in hope.  He is telling the people that, in spite of all the evidence, they are not abandoned; they are not forgotten; and life will not be like this forever.  God, says Jeremiah, is still in the picture, still active, still loving – even when that is hard to see, hard to understand, hard to believe.  And Jeremiah says to all who will listen, that that is where they ought to put their trust.

And even that is a bit of a problem for a king who wants his people to put their faith in him, in his policies, in his wisdom.  It’s a problem because he wants the people to believe that the city’s defences are strong, that it will survive.  ‘No, it won’t,’ says Jeremiah, ‘but that doesn’t mean that all is lost.’  We are, he says, still clasped in the arms of God – and ‘houses and fields and vineyards shall again be bought in this land’.  And our other biblical passages this morning explore where people put their faith – the faith that ought to be in God and God’s future.

And the place they fasten on as the place where people wrongly put their faith is in money, in the accumulation of wealth, in the desire for riches.  The lure of riches is the way to ‘all kinds of evil’, the letter to Timothy tells us.  And those evils are to be found in the way it makes people act, and think, and behave.  They become, the letter says, not only haughty (it’s amazing how often money is mistaken for superiority both by those with it and those without it) but also misguided.  They become misguided because they are guided by the money.  They forget their common humanity, and become focussed on gathering the lucre – believing that the more money they have the safer they are.

Jesus approaches the same topic by way of telling a story.  He tells a story of riches and poverty, and of the gulf (or perhaps gulfs) between them.  He tells a story of the way in which the poor become invisible to someone whose has become wrapped in his riches and in himself.  And his riches become how he defines himself, how he projects himself to those who will, he hopes, be impressed by them and, therefore, by him.  And not only is the poor wretch at his gate invisible to him, but so is the way in which he is viewed by him and by those in a similar plight.

Jesus tells a story of wealth that has lost touch with its purpose, and with the reality around it, and with God.  He tells a story of the reality of God and of the world – that you can’t take it with you.  Just as Timothy is reminded that ‘we brought nothing into the world, so that we can take nothing out of it’, so the rich man of Jesus’ story discovers that, if he sees his wealth as his identity, then death leaves him with nothing – not even an identity.  And that discovery is hellish; the discovery of who he really is is torture; the sudden awareness of how the world really is is all-consuming.

Jesus tells a story of damnation in which there can be no transformation, but of course he tells it in order to transform; he tells it in order to effect a change in his hearers, and in the society of which they are a part.  The story of despair is told in order to produce hope – hope for something new, something different, something more of God.  And Timothy is told similarly to warn those who are being entranced by wealth or even by its prospect that there is a world to live in which will not be transformed by the accumulation of wealth, but which might well be transformed by its distribution: ‘they are to do good, to be rich in good works, generous, and ready to share’.

The Syrian Observatory for Human Rights monitoring group said at least 27 civilians, including three children, were killed and dozens more wounded in the latest air strikes.  Ammar al-Selmo, the head of civil defence in eastern Aleppo, told Reuters news agency that the death toll was more than 70, with at least 40 buildings destroyed.  The Al Jazeera news agency tweeted that its bureau in the city had been partly destroyed.  Announcing the new offensive on state television late on Thursday, the Syrian government warned Aleppo residents to “stay away” from “terrorist positions”.  Syrian military sources said a ground offensive would follow.

Imagery of the shattered city presents a gaunt vista in which thousands of innocent people remain trapped on both sides. Targeted attacks by government forces against medical and civil defence facilities add another element of horror to the situation.  The fact that this new onslaught is taking place against a backdrop of the total failure in the US and Russian brokered efforts to implement a ceasefire in Syria is also significant. In the wake of this failure there is a good degree of bitterness on all sides.

How, in these circumstances, can bitterness possibly be replaced by hope?  There is probably no way of replicating Jeremiah’s action of confidence in the future – no surviving legal framework for following his example even if somebody wanted to do so.  But, whatever the immediate terrors that appear to be coming Aleppo’s way, there needs to be some way to announce hope in the future, a way to say that ‘houses and fields and vineyards shall again be bought in this land’.

And the key to the announcement of hope is how money is used; it’s whether the attention is directed to those with resources, or those without them.  Is our gaze on the rich man in his palace, because he might be able to influence things – or is it on the poor man, lying miserably in the ruins of his life, because he can influence nothing at all?  Because the truth is that houses will be built again, fields and vineyards will be bought and sold.  But what will be the road to that destination, and how long will it be?

The road needs to be navigated, however, with the eyes of the world on its suffering people, those who have no resources, no influence, and no hope.  And the resources of the rich world need to be used and shared with a generosity that matches the awfulness of the situation.  Only then can the hope Jeremiah sought to display have a chance to take root and to grow into something for the future and of God.

The Readings during the Service were: